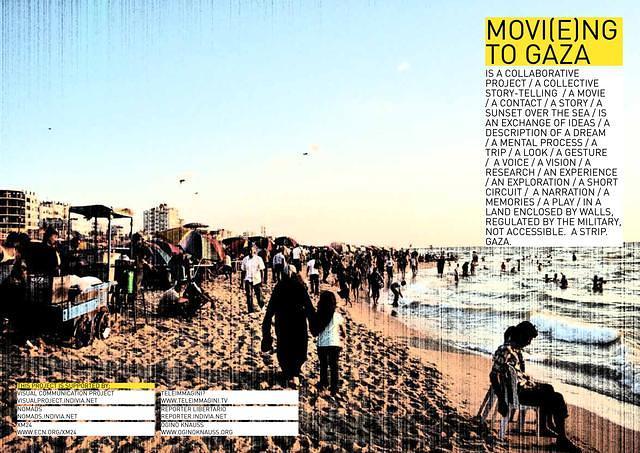 This film project is developing in the Gaza Strip, the Eastern coast of the Palestinian territories, on the Mediterranean Sea.
There the population is mainly descendants of refugees.
Since July 2007, following the 2006 Palestinian legislative election and the Battle of Gaza, the political group Hamas has functioned as the effective government.
In 2006 Hamas has won the Palestinian Legislative Election and as consequence Israel, the United States, Canada, and the European Union have frozen all funds to the Palestinian Government, considering the group as a terrorist organization. Israel put an embargo on the Gaza Strip, allowing in limited quantities of medical humanitarian aid.
The blockade was harming the Gazan economy and causing a shortage of basic medicines and equipment.
The economy of the Gaza Strip is severely hampered by high population density, limited land access, strict internal and external security controls, the effects of Israeli military operations, and restrictions on labour and trade access across the border.
As a result, international transports (both trade and aid) had to pass through Israel, which was hindered by the imposition of generalized border closures. These also disrupted previously established labour and commodity market relationships between Israel and the Strip.
A serious negative social effect of this downturn was the emergence of high unemployment.
Health conditions of the population show many cases of pathologies due to malnutrition.
The road network in Gaza is underdeveloped and a single standard gauge railway line that ran the length of the Strip from north to south is not operative.
The Gaza Strip has rudimentary land-line telephone service provided by an open-wire system, but the Digital Divide includes only the 20% of the population with a personal computer.

MOVI(E)NG TO GAZA is a collective story-telling Film Project.
The main goal is to describe the daily life in Gaza, especially the life of the younger generations, marked by small but deep signs of resistance.
They need to develop an attitude for humanity, because the risk is to be victimized by the sense of impotence to live in a city with no escape, an open-air prison, where the Israel Army displays daily violence. The daily fear of Gaza Youth can be described by the sensations on their human skins, mixed with political activism against the Israeli Occupation.
In this context we want to discover a land of humanity and resistance, breaking the silence of this youth and producing together a storytelling film on their lives.

The whole project will be an experiment of collective work between a crew of Italian video-makers and crew of Gaza video-makers, sharing together ideas, stories, experiences, visions and technical skills. In this sense, a participative eye and a collective point of view will express the return the naturalness of the gesture, the simplicity of the emotions, the strength of desires.
The idea is to have a film project that is also an intercultural experience between Europe and Gaza, breaking down borders and blockades.

The first step will be a first contact between the two crews, knowing each other and finding an intercultural communication. In this part of the project the crews will have a first contact to understand the respective needs and finalities inside a collaborative movie project.
The European crew is made by some free lance video-makers of TELEIMMAGINI / VISUAL COMMUNICATION PROJECT. The Gaza crew is formed by several free lance video-makers, bloggers and reporters.

The second step will be the selection of the stories, finding out different daily realities and creating a filmic continuity.
In this sense, the young Palestinians will choose i.e. four or five protagonists, which will describe the daily reality: the fishermen, constantly under the illegal attack of the Israeli Coast Police and risking day by day his life, the doctor, permanently faced with healing injured civilians caused by Israeli attacks, the peasant, as a target of the radical Israeli Settlers, the child, selling toys at the Checkpoint to earn some money to survive, etc..
The result will be a shared Screenplay, which will consist basically on the daily-life experiences of common people.
As stylistic choice, we will not use the classic face interview technique, but we will describe this ‘field of emotion’ through a fictional reconstruction of particular daily life moments.
In fact the project will focus on the process of narrative collection: the stories will directly come out from experiences, daily activities and desires that motivate them in their different existential paths.
This process will build a narration of the attitude to humanity, experienced by the younger generations, as an element of discontinuity with the classic forms of resistance and condemnation of the Israeli Apartheid-Policy.

The project will be developed in some phases:

1. First trip to Gaza to define the Screenplay and to film the first shots. The goal is to have the video material for a short trailer of the movie (about 10-15 minutes), describing the stories and defining the movie style.

2. Edition of the video material and planning of the next trip to Gaza to shot the whole movie.

3. Broadcast of the short trailer to construct a solidarity network on the project and to find more funds for the next trip.

4. Second trip to Gaza to shot the Screenplay defined in the first trip.

5. Edition of the movie, finalizing the project in every aspect (definitive export with sound equalization and color correction).